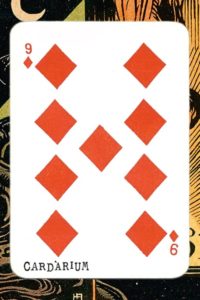 Nine of diamonds is a bad card without a clear meaning of its own. It just spoils everything that is nearby. Next to a heart it announces troubles in love. Next to another diamond it means a dispute. Nine of diamonds close to a club signifies financial difficulties. Finally, by a spade it means sad news.

Quick check:  is 9 of diamonds in your cards today? Are you going to have bad day or can you avoid it?

Detailed meanings for the Nine of Diamonds​ The Nine of Diamonds, isolated, says only one thing: Delay. It has no real value except from the cards that come with it.

Spade: News that will cause grief.

Diamond: Adversity to your interests.

Club: Losses in trade or investments.

Between two cards of the same value: A party postponed.

Between two diamonds: The card is null; it does not speak.

Between the Nine of Spades and the Queen of Spades: Death or inevitable disaster.

Between two clubs: The card is null; it does not speak. When coming forth in its natural position, this card is one of particular good omen, as it foretells great success in business operations and consequent gain. Its primary meaning comprehends the grand mainspring to human exertion, enterprise, while at the same time it assures you of the desired result, advantage or gain. Viewed as such its synonyms are, as to enterprise in the first instance:

To undertake; to commence; to usurp; to take possession of; audacity; boldness; hardihood; impudence; rashness; speculative; speculation; fearless in trade; in love.

When taken to represent advantage, the synonyms are:

We have the other side of the picture, for this card, coming up reversed portends the occurrence of dire mishaps and abject despoliation with its concomitant poverty. In view of this immense difference in the value and signification of this one and the same card in its two positions, too much care cannot be taken to mark the way in which it emerges.

In its modified signification of delay, its synonyms are:

But viewed in its more bitter light as spoliation and poverty, its synonyms are: This is the Unlucky Red Card if figuring as Master Card; meaning a personal Event of importance going awry; a Subtraction that must be admitted to others.

But if influenced by like suit, it is a favorable card and indicates a pleasing Journey, or Meeting.

By a Heart, an Enemy or evil opinion altered in your favor.

By a Club a Proposal of tempting kind.

By a Spade, a Plan that in success is doubtful and partial, or troublesome to another. Divorce, separation, break-up of a relationship.

If reversed – Temporary quarrel in love relationship or family. A woman, with a bird upon her wrist, stands amidst a great abundance of grape-vines in the garden of a manorial house. It is a wide domain, suggesting plenty in all things. Possibly it is her own possession and testifies to material well-being.

Nine of Diamonds meaning in a card spread. Try the original Cardarium readings. If you get the 9 of diamonds on the first go – that’s a sign of good luck. The Fortune  will smile gently and generously upon You.