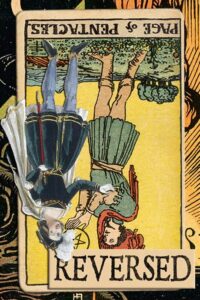 This Nine of spades is the worst card of the whole deck.
It is the sign of death.

Its meanings are very varied.
Isolated, this card says: News at night that will tell you about the death of a person. The card is cruel. It does not make any distinction: it can be death of a relative, a friend, an enemy, of an indifferent person, or in the worst – death of your parents or spouse.
According to the accompanying cards its meaning changes a lot.
You will be the judge of that.

Having on the right a
Spade ♠: Sadness for you. – Long illness of a friend.
Heart ♥: Break-up between friends.
Diamond ♦: Bad news.
Club ♣: Death of an man who is just your acquaintance.

Having on the left a
Spade ♠: Dangerous, but not fatal, accident, very slow to heal.
Heart ♥: Death of a close relative you do not love and will inherit.
Diamond ♦: Death of a sincere friend.
Club ♣: Death of an enemy.

EXCEPTIONS.
Near the Ten of Spades: Deadly Disease; the other card that touches the Nine of Spades is null; it does not count.
Between two cards of the same value: Infections disease.
With a heart or diamond face card: A relationship ruined due to illness or addiction.
With an Ace, Seven or the King of clubs, the Nine of Spades has no value; it must then be considered as not drawn from the deck of cards.
Placed between two Club or spade figures, it destroys everything that the other cards have announced and forces the consultant to repeat the consultation.