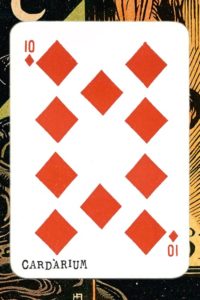 Ten of Diamonds represents a journey through which you will gain riches and wealth. This card announces that you will be forced to leave your zone of comfort. This change will not be pleasant, but successful, resulting in material or spiritual wealth. In short: Ten of diamonds will bring you diamonds.

Detailed meanings for the Ten of Diamonds​ Travel, change, certain displacement. This card has always been considered as announcing to the consultant a rather happy omen.

It tells him that something will happen in his life that will force him to move away for a longer or shorter period of time.

Spade: A trip that will not be free of annoyance.

Heart: A small matter of heart.

Diamond: Bad travel in all respects.

Club: Travel on business of interest.

Spade: A change will occur that is no better than your current position.

Diamond: Visit before the end of the week. – Leaving the town.

Near the Nine of hearts: Visit of people from the countryside or another town. (The other card touching ten of diamonds becomes null and void.)

Near the Nine of Spades: Travel to attend a funeral. Like its companion, the ace, which with this card form the only two in the pack possessing this peculiar quality, the ten of diamonds preserves its value and signification, whether it emerges either upright or reversed. The primary significations of this card are a foreign city, change of locality, gold, water, the sea.

As the representative of gold its synonyms are:

When its signification is assumed relative to water and the sea, the synonyms assume both a specific and general nature:

When the surrounding cards designate this one to be accepted as representing a foreign city, its synonyms are:

When accepted to signify a change in locality, the synonyms, in addition to preservation of its original meaning of a mere change in domicile, or habitation, are inferentially extended to embrace a wider scope, such as:

It will be seen that with the varied significations which can be given to this card, it is one of the most important in the pack. Ten of diamonds as Master-Card means a valuable Possession.

Influenced by like suit, is concerned one intrinsically of value, as jewels, money or plate, a house or estate.

By a Heart, a Secret: a Marriage.

By a Club, the aforesaid or another Possession will be (or has been) won by special exertions of the Querist’s abilities, or so to be kept.

By a Spade, it is endangered. If reversed – Dangerous and risky travel or change of job. Traps and deceits. A man and woman beneath an archway which gives entrance to a house and domain. They are accompanied by a child, who looks curiously at two dogs accosting an ancient personage seated in the foreground. The child’s hand is on one of them.

Ten of diamonds as a Birth card:
15th to 21st of November “All our dreams can come true if we have the courage to pursue them.” – Walt Disney.

Success comes naturally for the ones under the influence of the Ten of Diamonds birth card. This card also resembles a very materialistic person that enjoys the luxuries that a wealthy life can provide. If anyone can build a life fulfilled with wealth, success, and accomplishments, it’s for sure the Ten of Diamonds. The urge to accomplish their goals drives them to try their hardest in every area of their life. They are remarkably talented in business and can make a handsome living.

The Ten of diamonds are also very spiritually enlightened and can reach their higher self if they rely on their intuition. It’s sporadic to see them pay more for something that isn’t worth the price as they tend to be extremely careful with how they spend their money. This also applies to generosity from other people. It might be challenging for them to accept that somebody else would do something for them voluntarily and without expecting something in return.

Personal Message: Your ambition to achieve what you desire is one of your drives for accomplishing your goals. You know how to keep your eyes on the price, and nothing will stop you from getting what you want out of life. Your determination makes other envy you. People look at you as an example to follow, and while this is an excellent place to be, it also makes you a little vulnerable. The way people treat you can lead you not to be able to trust other people’s intentions. When someone grants you a nice gesture, you tend to instantly believe that they have come with second intentions.

The feeling that people only get closer to you when they need something from you can be explained why relationships don’t come easy to you. It’s wise to protect yourself from harm’s way, but shutting the door to everyone who shows any interest in your well-being can push those beautiful connections away. Try to see beyond your fears and leave room to understand their genuine reasons. Past trust issues can be holding you back.

Famous People Who Share the Ten of Diamonds Birth Card

Ten of Diamonds meaning in a card spread. Try the original Cardarium readings. If you get the 10 of diamonds on the first go – that’s a sign of good luck. Think of it as a positive omen for change in your life.

This gorgeous 10 of diamonds card is from a vintage Dondorff deck “Vier Erdteile”. A playfull and a bit naughty 10 of diamonds Good old classic feel card from 1930’s patience deck that brings memories and warmth of many hands  that touched it over the year. If you open this card in a reading, no doubt your enemies will be caught like flies in a spider net. This card comes from a weird, but vary flavorful deck of evil force russian fairy tales. Flovers should be gentle and romantic, right? This deck is not about niceties, it is about a conflict. I would use it for cartomancy readings on break-ups, career change and business issues.